Harness Your Headwinds: Valuable Advice from an American Hero

Harness Your Headwinds: Valuable Advice from an American Hero

Editor’ Note: After attending one of the keynote speeches at the 48th LTEN Annual Conference LTEN member Molly Gallagher shared this recap of the presentation. We’re happy to share it with you. Feel free to tell us about your favorite part of the conference at editor@L-TEN.org or through the LTEN On-The-Go app. 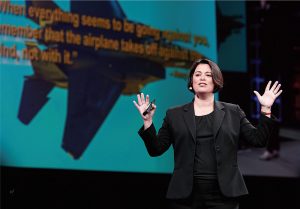 At the LTEN Annual Conference, the bar is set high for unique motivational speakers that capture our attention and surpass our expectations. On June 5 at the 48th LTEN Conference in Grapevine, TX, retired U.S. Air Force Col. Nicole Malachowski delivered a spellbinding and empowering keynote that soared.

In her keynote, Malachowski reflected on her background as a former combat pilot, the first woman Thunderbird, a White House Fellow and a colonel. We were drawn in by her relatability, humor and authenticity. 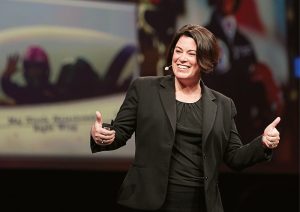 Universally, we all have obstacles between us and our success. Pilots wish each other “Blue Skies and Tailwinds” in flight, because those are the best conditions for flying. Tailwinds blow in the direction of travel and propel you forward. Headwinds push against you.

Malachowski shared that flying in a blue sky with no headwinds is amazing, but if you want to be a successful pilot, you must learn how to harness headwinds. Using headwinds is a metaphor for struggles in our careers and lives, Malachowski said headwinds manifest themselves as personal, organizational and larger world-changing obstacles that we must navigate to survive and thrive. Like all of us, it wasn’t blue skies and tailwinds for her career. And she wanted to share with us how she harnessed the headwinds in hopes that we can do the same.

“When everything seems to be going against you, remember that the airplane takes off against the wind, not with it.” – Henry Ford

Failure is a Headwind

From the age of 5, Malachowski wanted to be a fighter pilot. Her parents were both supportive of her dream. In high school, she was a member of the Air Force Junior ROTC, where she fell in love with flying. In the Air Force Academy, she was a pilot and instructor and earned two master’s degrees.

To become a fighter pilot, the testing was rigorous and competitive, and failing a test jeopardized your spot in the class. During one test, everything went wrong pre-test, but she was still able to execute the maneuvers. But, the instructor failed her for a minor mistake. That day, Malachowski almost gave up. But her mentor encouraged her to take accountability for her mistake and not give up. Failing is what forced her to learn from her mistakes and be a better pilot.

“Failure is the price of entry for achieving something great”

Change is a Headwind

While her parents and husband supported her dream to be a Thunderbird pilot, from everywhere else, she was given a different response. She was told, “There has  never been a girl. You can’t do that. You aren’t good enough.” After years
ignoring her dream, Malachowski decided to apply. Nicole went to a superior officer to apply in person, and his secretary asked Nicole, “Do you think he should waste his one vote on you?”

The secretary wasn’t being malicious; moving against the status quo can be threatening. Malachowski decided not to apply and instead left to drown her sorrows at a bar. While drinking her beer, the superior officer’s superior happened to walk in. One of the other bar patrons told him she was applying to be a Thunderbird. Malachowski was mortified and she repeated every negative message she had been told. He gave her the greatest gift when he replied, “Nobody wants to live a scripted life.” He pushed her application through himself. 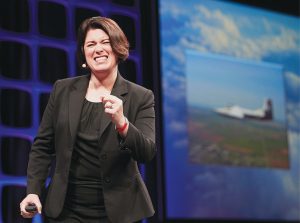 As a Thunderbird pilot, Malachowski performed with her team. At one show, she was talking to young, starstruck girls. She told them, “You can do anything! You can be a pilot! You can fly!” While she was encouraging them, a naysayer interjected, “Girls can’t be fighter pilots. Don’t lie to them.” Nicole wanted to let him know exactly what she thought. But, she chose in that moment to resist the urge. She kept her focus on her audience of young girls who admired her.

When you are in a situation with a powerful naysayer, say to yourself, “You are NOT my audience.” Filter out the naysayer’s noise and focus on what is important. Ask, “Who is my audience?”

Ask for and Give Help

Malachowski shared a video of a Thunderbird maneuver that terrified her. She was a very experienced pilot and part of an elite team, but her fear negatively impacted the performance when they did one specific maneuver. Worried that she was putting her life and the lives of her teammates at risk every time she faced this dangerous trick, she raised her hand during a debriefing and admitted that she couldn’t do it. With humility, she explained her fears and confessed her shortcoming. Together the team came up with a plan for helping her improve her confidence in the maneuver.

To grow and be our best, we need to be in an environment where we can raise our hands and ask for help without being met with judgment or shame. We need to have a supportive and united environment.

As a learning and development professional, what are you doing to create a culture where people can ask for help? 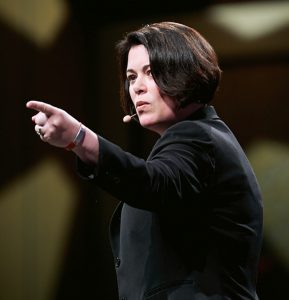 During airshows, Malachowski noticed that turbulence was impacting her more than it impacted the other pilots. She humbly explained the issue and asked for help. The other Thunderbirds explained that when they hit turbulence, instead of fighting it, they loosened their grip. If you start to fight against every bump, you create Pilot Induced Oscillation (PIO), which is highly dangerous at high speeds and with aircraft within proximity. Their advice went against her gut, but she trusted her teammates. Nicole started loosening her grip. She would be within three feet of the other plane holding with just 2 fingers loosely and trusting them to do the same. When they all flew loose together, they were safe.

When you are facing turbulence and change, loosen your grip. Don’t try to control it by fighting against it.

When Malachowski was 13 weeks pregnant, she suffered a traumatic fall and required emergency surgery to save her leg. After surgery, she was put on bed rest because her contractions started if she got out of bed. At 21 weeks, her labor began. Malachowski was told that she wouldn’t carry her twins to term. But, she wouldn’t give up; she was in labor for 54 days. They put her body into a position where her feet were up to hold the babies in her body. She had contractions every 3-12 minutes. This painful and scary experience taught her that she was stronger than she ever knew. Malachowski carried her babies to 29 weeks and a day and coded during their birth. Her babies were in the NICU and survived. Malachowski feels that she had no choice but to do her best in the moment. She had to “Yield to Overcome.”

To get through the impossible, ask, “What can I do in this moment to survive?” The runway is never behind you. You can’t go back. You can only go forward. 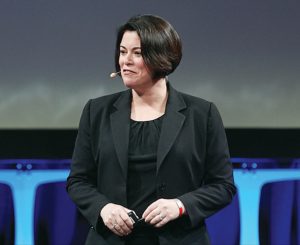 Malachowski had a successful military career beyond her dreams and was able to proudly serve at the White House. However, against her wishes, she was medically retired from the Air Force, with discharge papers that state she is 100 percent medically unfit for duty.  Malachowski went from a commander proudly serving her country to someone who was bedridden, easily confused and unable to speak. It took 24 specialists, eight specialties and three misdiagnoses over a period of 1,000 days before she was correctly diagnosed with neurological tick-borne illness. Malachowski’s childhood dream and her amazing career came to an end because of a tick.

Malachowski explained that after not being able to speak for nine months, she realized she had a lot to say. Resilience means bouncing back to your previous self, she said, but, there was no going back to who she was before her pregnancy and before her debilitating illness.

These were earth-shattering experiences. Through these experiences, she said, you will look at others differently and have a greater compassion for what others have gone through. Being able to speak again, she wanted to share what she learned through her resurgence.

Being broken is part of the human experience. When you find yourself in a position like this, yield to overcome and embrace your resurgence.

Finally, Malachowski left LTEN members with some words of advice: