Innovation doesn’t have to be created by the training team … just discovered by it!  The training team at LEO Pharma learned that lesson on Oct. 15, 2018, when multiple stakeholders gathered together for an important brainstorming session. The result was an award-winning and impactful idea.

The question before the team was an all-important one: “How do we improve sales force knowledge about our products and those products in the competitive landscape?”

The room was silent, until Jessica Swanson, a marketer, raised her hand.

“What if we designed an escape room?” she said, somewhat tentatively and maybe even with the same slight exasperation we were all feeling.

That was the moment that changed the 2019 National Sales Meeting, the moment that brought it to life. A marketer shared a moment of genius, and the training team recognized it.

The escape room idea would go on to be a successful training innovation for LEO and earned them the Practitioner Innovation honor in the 5th Annual LTEN Excellence Awards.

Gerald Golden, a first-year trainer, later said he had no idea what an escape room even was. Little did he know how much work was in store for him, and that within the next four months he would become the resident escape room expert!

Vicki Colman, LEO’s senior trainer, and Gerald wasted no time getting a handle on the concept. The very next week the two of them found themselves at three local escape rooms: Crusader’s Alley, Amazing Escape Room and F5 (a tornado-themed escape room). The entire training team joined them for the F5 experience.

For any training team thinking about developing an escape room, visiting a variety
of themed escape rooms in your area is a must. We found ourselves sharing ideas immediately after our F5 experience, and Golden was able to draw upon the different approaches he and Colman had observed.

As Golden transitioned to the development phase, there were several challenges that had to be addressed. Each challenge, two in particular, required a unique solution.

It was fun to see innovation and learning objectives come together.

Challenge #1: Ensuring that Learning Stayed at the Center of the Project

We knew the escape room was innovative, but if the objectives drifted to entertainment, then it would only be shallow innovation. We were looking for meaningful student engagement and learning. This became one of the topics Golden regularly discussed with the team as he developed the final escape room.  There were always several intriguing approaches that could be taken to engage participants, and often the conversation would circle back to the question, “How will that help participants learn?” or “How will that put their clinical knowledge to the test?”

The result of keeping learning in the forefront was impressive. Each of the major clues in the escape room were tied back to one of three learning objectives.

The first objective: Participants ability to demonstrate specific clinical knowledge about our products.

The second objective: Participants ability to demonstrate knowledge about the competitive landscape.

The third objective: Participants ability to deliver a sales message utilizing clinical knowledge about a LEO product with clear confidence. As a training team, we operated under the belief that if sales representatives mastered the first two objectives that it would contribute to their ability to more naturally accomplish this third objective.

Each of the major clues in the escape room were tied back to one of three learning objectives.

It was fun to see innovation and learning objectives come together. For example, safe boxes disguised as books required numbers from LEO product efficacy data to open them. Golden was required to tell the story in a clever way to make this first major clue interesting and challenging. On the desk there were pictures of body parts, a calendar, a hand-written receptionist’s note, two stacks of books and a container holding pens. Everything except for the pictures of the body parts looked standard.

At closer inspection, participants would find that the month of December was circled in the calendar. The hand-written receptionist’s note wasn’t just clerical either. It read, “Roses are red, violets are blue, for this answer you will need two.” It took a fair amount of deducing to connect the dots about which types of data helped solve the puzzle. Of course, they had to rummage through the books to even discover that they weren’t all just books as they seemed. This exercise required the abstract thinking that occurs in all escape rooms, but it also required participants to know the different types of data for a specific product.

Challenge #2: Typical Escape Rooms Are Designed So that Not Everyone Escapes

The more difficult the escape room, the less likely you are to get out. In fact, that’s part of the draw, the fact that it’s not a foregone conclusion that you will escape. How could we create an escape room that turned this concept on its head, that actually ensured 100 percent completion, yet maintained the competitive element and uncertainty of the experience? This was indeed an interesting challenge.

There were six major clues that needed to be solved in order to escape Dr. Tigre’s office. Golden landed on the solution of having a 10-minute time limit for each clue.  After a team worked on a clue for seven minutes, if they hadn’t solved it yet, they were given an additional mandatory clue by the facilitator and assessed an automatic five-minute penalty. At nine minutes, if they still hadn’t solved the clue,  the facilitator walked them through the answer.

In the end, the result was a workshop that was very challenging yet rewarding.

This ensured all participants learned the same material, but those teams that knew their product knowledge the best, and were able to put the clues together, moved on to the next clue more quickly and without a penalty. This approach made it easy for scheduling purposes because we now knew the escape room would take no more than 60 minutes to complete. Each team, however, would be assessed a different time, depending on their actual escape time plus penalties.

Of course, there were numerous nuanced challenges in creating the escape room, too many to note here. The vital steps, though, that led to the success of the project, are the elements we’ve tried to bottle up so we can use them again: Invite all stakeholders to brainstorm ideas, keep learning objectives at the forefront, begin preparations far enough in advance to allow failure along the way that leads to eventual success, and finally… keep an open mind for innovation that might surprise us!

In the end, the result was a workshop that was very challenging yet rewarding for participants. One of our favorite level 1 survey quotes about the workshop was, “Best workshop ever! Amazing!” This seemed to be the feeling representative of so many participants. To us, this meant people enjoyed learning something vitally important to our business… and that’s why we’re in the training business!

The purpose of the escape room was to create a learning environment. Level 1 surveys following the meeting indicated two things; participant learning was enhanced by the format of the workshop (9.2 out of 10 rating) and participants found the content valuable and felt motivated to apply the learnings (9.3 out of 10 rating). Thirty percent of survey comments highlighted the creativity, team building and fun aspects of the exercise, and how the workshop helped reinforce product and marketplace knowledge. 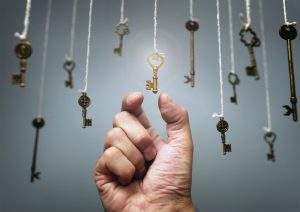 “It was exciting to see our Territory Business Managers work as a competitive team utilizing product knowledge, disease state competitors and strategy to progress through each stage of the escape room and exhibit the enthusiasm for doing so,” Golden said.  “Receiving feedback from the sales force on how interactive, fun and what they learned from the workshop was truly an amazing feeling that I was proud to be a part of.”

Inside the Escape Room

The signal had just been given and 84 sales representatives feverishly began searching for clues in Dr. Tigre’s reception area. Because there were 8 identical versions of Dr. Tigre’s office, teams of approximately 10 participants worked together in their respective waiting rooms. Sales representatives had already spent the better part of two days in workshops and learning labs… all in preparation for the Dr. Tigre Escape Room.

Each team knew they were competing against every other team. Who could escape Dr. Tigre’s office with the lowest calculated time? The race was on!

Dividing the reception area from Dr. Tigre’s office was pipe and drape from ceiling to floor, with only a small opening leading from one room to the other. The reception area was completely furnished with a receptionist’s desk, filing cabinet and chairs and a couch in the waiting area. While participants could catch a glimpse of the doctor’s office, they were not allowed to leave the reception area until they completed a series of puzzles.

The more effective teams quickly divided into smaller groups. On the receptionist’s desk sat two stacks of books, the usual container holding pens, and some images that appeared to be abstract. Participants quickly realized the images were clues, but it took some deducing to figure out that they represented body parts treated by the company’s products.

Fairly quickly others found that the stack of books wasn’t as ordinary as it appeared. One of the books in each stack only looked like a book but was in fact a hollow box with a combination lock protecting the contents just beneath the front cover. Through rapid and intense exploration participants had to discover that it was the efficacy data, and the numbers used in their marketing visuals, that would unlock the books.

What was inside the books? One held a blacklight used to interpret a later clue.  The other held the battery to power the blacklight.

The same principle held true throughout the experience. Efficacy and safety data were the keys to solving puzzles and ciphers, unlocking cryptexes, safe boxes and sealed backpacks. Everyone had a chance to demonstrate what they had learned in workshops and pre-work. It was the ultimate Kirkpatrick level 2 learning evaluation!

Daniel Skoubye was formerly the director of sales training for LEO Pharma.