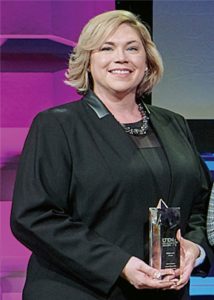 Sometimes in training we have to metaphorically invent the wheel. Leading that kind of project has earned Melissa Lowe of Philips Healthcare the 2019 Training for Change honor in the 5th Annual LTEN Excellence Awards.

Lowe, senior manager, healthcare informatics technology sales training, for Philips was charged in the summer of 2018 with developing and delivering a world-class program with a new marketing team. The ISEE program – IntelliSpace Enterprise Edition – supported a drive to enable health systems to manage the growth and cost of clinical enterprises.

Lowe, who was in her first 60 days in a new position herself, created a compelling way to introduce the new concepts. The program was successful in an area the company had struggled with.

“The ISEE sales team had missed its number for numerous years,” said Greg Adamson, senior director of sales training, North America, for Philips, who nominated Lowe for the LTEN award. “Melissa reignited the excitement level by offering a thorough and imaginative curriculum. Melissa interviewed the head of sales, head of marketing, numerous sales leaders and reps to determine the real underlying needs before developing an agenda and then trying to shoehorn the curriculum into the agenda.”

Lowe also conducted numerous workshops in advance to pressure test the material and worked with sales leaders in advance, so when the course began, everyone was onboard with the content and process.

The ISEE group had never been trained with any type of sales training previously (only product training), Adamson said.

“Modified role-plays had previously been dismissed and laughed at,” Adamson said. “Not this time. Melissa modified the event to make them think they were doing ‘word problems,’ yet they ended up with robust role-plays.”

It worked. The ISEE team “blew out the number in the back half of 2018,” Adamson said “working with renewed confidence that was a direct reflection of the work Melissa had delivered and the confidence instilled in our sales team.”