The technology is finally here to make virtual reality accessible and practical for more people.

While the potential for virtual reality (VR) has been talked about for decades, there have been daunting technological hurdles and hefty price tags on lackluster products. Now, new technology platforms and advancements have opened the door to mainstream VR.  China boasted an estimated 1,000 virtual reality arcades in 2016 and the popularity has caught around the world. In the past two years, virtual reality arcades have started popping up in cities across the United States. Now, groups of friends can be immersed into a virtual zombie apocalypse and together fight against an army of undead.

With the digital revolution in full throttle, the technology is finally here to make virtual reality accessible and practical for more people. Industries are exploring the application of VR for business solutions. Is VR practical enough for life sciences companies? And as a learning professional, should you jump on board?

After Facebook’s CEO Mark Zuckerberg bought the startup Oculus VR for $3 billion in 2015, VR was all over the news. Since then, there has been limited news of any success stemming from that purchase. This has contributed to the perspective that VR is an expensive, risky investment. But VR doesn’t have to be expensive and it is already being used successfully in healthcare. 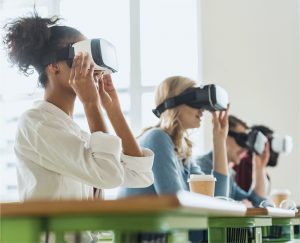 A primitive example of virtual reality is the View-Master, the popular toy of the early 1950s that combined two images to create a 3-D image in a handheld viewer.  When a child looked through the View-Master, they were virtually transported to Disneyland, or Yellowstone, or on a voyage to the bottom of the sea.

The advancement of 3-D images has had an important role in the healthcare industry’s early adoption of virtual reality. In the mid-‘90s, the U.S. National Library of Medicine created the Visible Human (VH) Project, a library of three-dimensional representations of male and female bodies that are publicly available. This anatomical atlas has helped students, practitioners, patients and drug developers explore the bones, muscles, vessels and organs of the body virtually.

In medical school laboratories, 3-D images from the VH library are projected onto the side or back of students to show the location of internal organs. The VH data has been used to teach triangulation skills for injecting BOTOX therapy correctly.

Touch of Life Technologies has developed surgical simulators that utilize the VH data, ultrasound guided needles and cutting-edge haptic (or touch) technology to create safe, realistic simulations of appropriate needle penetration. Two decades of open access to the VH data propelled VR in healthcare earlier than most industries and the potential for VR has only grown.

Today’s VR tools employ advanced technology to further enhance the immersive experience. Perhaps the most iconic technology for the current wave of VR is the VR headset. While once a large investment, the cost of the new Oculus GO VR Headset is $200.

One healthcare tool that requires the VR headset is YOU by Sharecare VR. YOU builds on the VH data with advances in computational pathophysiology to help users observe and interact with the functions of the human body. With YOU, users can customize the immersive experience to explore the pathophysiology of diseases and visualize the impact of medical treatment options. VR tools can help facilitate conversations between medical care providers and their patients, clinical researchers, and pharmaceutical companies.

In the United States, Stanford University has been a leader in healthcare applications of VR. At Stanford, MRI scans of tumors become 3-D holograms and surgical aids. Surgeons use a VR headset to reflect the hologram of the tumor directly onto the surgical site. Developers from Stanford University designed an app that works with Google Glass to help autistic children understand facial expressions and decode social cues. Recent studies from Stanford’s Virtual Human Interaction Lab have shown that avatars can be used to improve confidence and happiness in users, with implications for use in psychotherapy.

Psychotherapy practices are employing virtual reality exposure (VRE) therapy with VR headsets for patients. One example is Ovation, which helps users practice public speaking using a VR headset. As a development professional, do you have leaders who could benefit from virtual public speaking courses?

A virtual environment called Second Life Impacts Diabetes Education and Self-Management (SLIDES), helps diabetes patients with disease management behaviors. Patients can immerse themselves in a realistic, safe environment in which they can learn new skills and practice positive behaviors.

Not all of VR requires headsets and 3-D imaging. In what is referred to as “Wiihab” researchers have found that Wii programs can be used in conjunction with conventional rehabilitation for children with cerebral palsy to improve balance and mobility. Since 2008, physical therapists at the William Randolph Hearst Burn Center at New York-Presbyterian Hospital/Weill Cornell Medical Center have used Guitar Hero III on the Nintendo Wii to help patients move and stretch their skin after a skin graft. Other applications of Wii-hab include recovery after stroke, brain injury, and orthopedic surgery.

As learning professionals, we know that the closer the experience is to reality, the more effective the learning will be.

VR in Training Outside of Healthcare

With a boost from the Virtual Human Project, healthcare had an early start with VR. But other industries are catching up and many are finding innovative VR training applications.

The Los Angeles Sheriff’s Department (LASD) utilizes VirTra, which is an intensive VR environment without headsets. The officers are fully immersed into the scenario with the same equipment and time constraints they would have in real-life. When grave mistakes are made, the scenario is stopped and reviewed. The officers are given another chance to respond.

In the school shooting scenario, officers practice reacting in the heat of the moment to a complex, life-threatening situation with little to no risk to themselves or the public. As learning professionals, we know that the closer the experience is to reality, the more effective the learning will be in creating change.

On the other side of the spectrum, KFC has taken a less realistic approach to VR in training. KFC has developed a VR training simulator in which employees are trained to prepare and cook chicken in an escape room that is haunted by a disembodied Colonel Sanders. High-pressure game tactics are employed to increase motivation.

Ford Motors has used VR since 2000 in manufacturing, reducing the rate of injury to employees. The Volkswagen Group utilizes VR training to educate their employees in efficient workflows and plans to make their VR scalable to the size of  their growing company. Other companies who are employing VR for training include Walmart, UPS, NASA and Boeing.

What Does the Future Hold for VR?

In healthcare, global research efforts are designing digital patients with anatomical, physiological and behavioral attributes. We will be able to explore physiology on a molecular level. Supported by the FDA, one objective of the digital patient is to eliminate danger to human subjects in medical studies. While digital patients in clinical trials may seem far-fetched, the VR landscape is constantly evolving.

If we think about how far VR has come and where VR is going, it’s time to jump on board. That doesn’t mean you should purchase VR headsets for every employee. It does mean that it is time to evaluate VR for business.

If you are not using Virtual Human data, would it be helpful to incorporate 3-D images in your digital CVA? Does VR fit into your medical device training? Are there patient education materials that could become interactive VR experiences? Are there procedures that could be trained through VR? What problems do you face that VR might be able to someday solve?