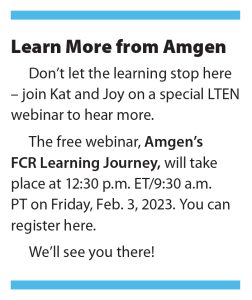 When Amgen’s commercial learning and performance team embarked on a global sales coaching initiative, both sales leaders and learning leaders wanted to zero in on field coaching reports (FCRs).Several influencers in the group cited their own positive experiences when they had been specialists in the field and their managers had provided valuable coaching — not just face-to-face, but also in their reports.

Part of the thinking behind the initiative was an understanding that people remember what they see in print. Amgen’s leaders believe FCRs can and should reinforce solid curbside coaching.

Amgen’s review of FCRs from a few different business units didn’t offer any surprises, but it also didn’t offer a glowing picture of FCRs.

Learning professionals know that specialists are more likely to replicate positive behavior when they understand what the behavior does for them. Including the benefits, such as a strong sense of what the customer is thinking, helps managers “sell” performance.

Too much of the content of Amgen’s reports focused on vague generalities, especially when offering coaching advice.

During planning discussions, Amgen’s leaders considered that managers may think they’re coaching when they identify something that needs to improve, such as “keep your customer more engaged.” If managers don’t explain how to ensure engagement, however, there’s a risk that a specialist will not understand what action is necessary.

After testing some training with pilot groups, Amgen decided to take FCR sales coaching to a new level. The goal was to ensure the training was not just an event, but a new way of coaching at Amgen.

Underlying Amgen’s focus on FCRs is the expectation that managers will transfer what they learn to their face-to-face coaching.

By including Amgen’s sales leaders early in the plans, the commitment to a new way of coaching has spread throughout the commercial group.

For each business unit, Amgen starts with a baseline assessment of one FCR from each district manager (DM). This identifies strengths as well as opportunities —just like a good coaching report!
Instead of limiting the assessments to review by senior leaders, however, each assessment is shared with the DMs so that regional directors (RDs) can discuss the findings within their regions. Because the assessments include excerpts from the DM reports, everyone can see what they’re already doing well, and they’re motivated to strengthen their reports.

More than 35 certified facilitators are delivering POWER Sales Coaching, a training program created by The POWERformance Group. To use everyone’s time wisely, the training was split into two separate sessions. As much as possible, Amgen is including two facilitators for every training session.

All RDs are attending the training along with the DMs. Amgen has two reasons for that:

Recognizing that the best coaches just have a knack for saying things in a way that motivates and inspires, Amgen decided the central focus would be learning how to leverage a coaching language. The simple language consists of word prompts and formulas that make sense for coaching.

One of the most popular word prompts is next time. Here’s the thought formula: “Start with next time and offer specific coaching direction.” An effective coaching comment, either in person or in writing, could be something like this:

A lot of managers would use a documenting style and say, “You forgot to use your iPad.” Instead of focusing on the past and what went wrong, Amgen’s leaders want managers to look ahead — to coach for “next time.” Since it’s impossible to change less-than-expected behavior that already happened, the focus is on fixing it going forward.

Amgen is using two job aids to reinforce the coaching language and scheduling enhancement sessions to offer practice time with peers. Each DM also receives a personalized coaching review with feedback on a new coaching report.

After still more time to practice on their own reports, DMs and sales leaders receive a progress assessment based on one FCR from each DM. Just as in the baseline assessment, excerpts from the DMs’ reports illustrate what’s effective and what still could be better.

Although RDs are coaching the DMs throughout the sales coaching initiative, coaching the coach at Amgen begins in earnest after the progress assessment. RDs use information from the assessment to determine coaching plans for each manager. Some of their advice is for team sharing, and some of it is specifically for one-to-ones.

A coach-the-coach job aid is helping RDs dig deeper to discover what a manager is doing well and what they can improve. And, most important, what action the manager can take.

DMs receive reinforcement of three essential questions they learn at the very beginning of their training. Every person being coached should be able to answer three questions:

The final step in Amgen’s FCR learning journey uses data collected at three critical checkpoints to measure the impact of the initiative. Ongoing feedback from both DMs and RDs has already suggested there’s a major change in the quality of coaching. When the impact studies are complete, Amgen’s leaders will know if the initiative was worth all the effort.

Honoring the Imperative of Rest