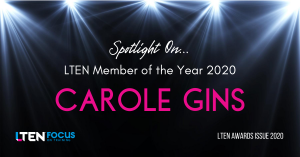 MEMBERS OF THE YEAR – By Tim Sosbe

One of the highlights of the annual Excellence Awards ceremony is the chance to reveal the LTEN Members of the Year, the people who’ve gone the extra mile to support LTEN’s mission and members. While we couldn’t come together in person to open that envelope, the Member of the Year reveal at the LTEN Connect virtual training forum was still a memorable way to honor two remarkable members.

This year, the LTEN Board of Directors selected a Member of the Year from primary market (or “practitioner”) companies and one industry partner honoree as well. It’s our pleasure to introduce to you the 2020 LTEN Members of the Year, Jim Page of Sandoz and Carole Gins of IC Axon, A Division of GP Strategies.

Contributions: Jim Page has been an active and involved member of LTEN since the beginning, and has always been a reliable resource. As a member of the LTEN Advisory Council, Jim actively supports the LTEN Board  of Directors by helping actualize programs and projects. He’s also authored articles and appeared on webinars for LTEN, and is a fixture at LTEN events, where he  requently assists other members.

Quote: “What a true surprise! I am honored to have been nominated and selected.  I am the sum of my experiences, and so ‘thank you’ all of the colleagues, mentors and leaders who have taught me so much over the years. Thanks to LTEN for this award  and for letting me play in the sandbox with you. I’m grateful to be a part of this organization!”

Contributions: Carole Gins has been a strong supporter of LTEN since before suppliers were allowed to be members. Then and since becoming a member, Carole has consistently been a friend to everyone.  She’s served on the LTEN Advisory Council as well as the Preferred Industry Partner Advisory Council, and her company has been an active sponsor of LTEN programs and events.

Quote: “First, I wish to express my gratitude to LTEN and the Excellence Awards Committee for considering me for this very special award. It is a great honor to be recognized by peers and industry members. It was so unexpected, and it made me blush behind my screen! LTEN is a remarkable organization and I am proud of its  achievements, even more so in 2020.”

Nominations for Members of the Year are solicited from LTEN members and partners, as well as the LTEN Board of Directors, Advisory Council and staff. To make the final selections, board members look at volunteer contributions, work on committees or programs and generally those who selflessly give to support both LTEN and the broader life sciences training industry.

LTEN will again name Members of the Year at the 50th LTEN Annual Conference in  June 2021. If you are aware of a member who has contributed significantly to the success of LTEN, please take advantage of the opportunity to nominate them for recognition. Your thoughts on potential LTEN Members of the Year can be sent to Dawn Brehm, LTEN executive director, at dbrehm@L-TEN.org.