Tug of War Lessons for Leading 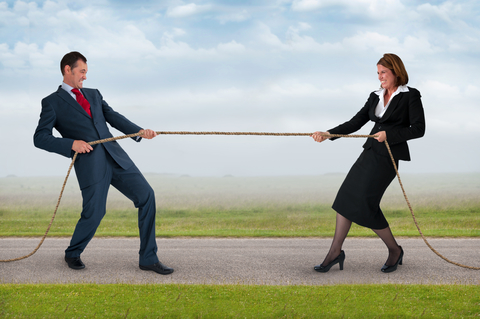 Every leader should be asking themselves, “What am I creating?”

Answering this question clarifies your personal choices and actions, and it also provides directional orientation for your team members’ choices – it creates alignment.

Organizations exist for a singular reason: to harness the collective power of the group.

WE can accomplish more than I, and our collective efforts are most effective when WE move in the same direction together.

If you’re looking for a multiplier effect from your teams, then look no further than creating alignment.

Teamwork, however powerful, also challenges (and often frustrates) every team member who has to suppress their personal needs and impulses and emphasize emotional intelligence in order to consider the needs of others. On the downside, teamwork can rob us of our spontaneous expression and blur our coveted individuality. On the upside, teamwork can provide a platform from which we can accomplish meaningful and breathtaking achievements.

Tug-O’-War… A Lesson in Leadership & Teamwork

Teams generate power when everyone is focused on the same horizon.

When each member can answer, “What am I creating?” in the same way, the result is amplification. By collectively focusing on the same objective, they harness the power of alignment.

I learned this lesson when over many sessions of Tug-of-war.

I grew up playing this game a lot, as it cost nothing, was easy to set up and was intensely competitive. With a heeled shoe, we’d scratch a line in the dirt, then we’d split our group in two. Each group took hold of opposing ends of a strong rope, and on command we’d begin to pull. I remember the effort that we expended as we pulled the rope in order to draw the opposing team toward us and over the midway line.

The biggest and heaviest team member was typically the “anchor” planted at the end of the rope. As the resident “big boy,” I spent my tug-of-war career as the anchor. From here I had a clear view of my team as well as the opposing team. What I learned watching both teams is that the size, weight and strength of the team were not the most important predictors of who would win the game.

By collectively focusing on the same objective, they harness the power of alignment.

Alignment was the winning factor. Teams whose members pulled together at the same achieved cumulative force. When our backs, feet, and waists were lined up and pointing in the same direction, we became unified. The combined force of an aligned team magnified our individual contributions exponentially. I remember many sunny days anchored at the end of the line, and hoping the opposing team would look disjointed, that their guys would be out of sync, pulling the rope at different angles. When even one person pulled at a different angle, the entire team lost their cumulative force and, rather than win, they struggled.

Applying the Tug-O’-War Concept within Your Team

Organizations, too, are pulling against competition in an ongoing contest for market share, resources and talent. This constant tension is a tug-of-war with consumers and competitors.

Each organizational function is a hand on the collective rope. Aligning the functions is not a mere philosophical abstraction; it is a dictate of mechanics and physics. Team members pull the rope at the operational level. When R&D, for example, pulls the rope North and production pulls the rope West, the organization falters.

Leaders are engaged in a constant tug-of-war, with not just one, but multiple ropes being pulled by multiple teams in multiple directions. As so many factors push and pull leaders’ attention and energy, it is focus — ”What am I creating?” — that shapes the most effective decisions. Clarity of choice and decisions arise when you can definitively answer, “What am I creating?” as a person, as a leader and as a team. This focus is your vision and your commitment to the future, and it illuminates a path of decisions, relationships and behaviors that pave your unique path to success.

Eric Kaufmann is the founder and president of Sagatica, Inc. and the author of the forthcoming book, The Four Virtues of a Leader: Navigating the Hero’s Journey Through Risk to Results and the facilitator of the LTEN Transformative Leadership course. Email Eric at eric@sagatica.com.