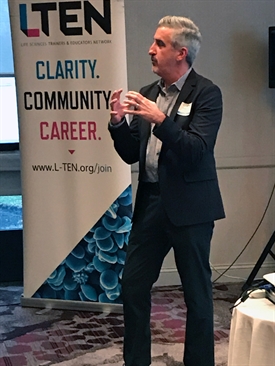 More than 70 LTEN members and their colleagues turned out for the April 18, 2018, LTEN Network After Work mixer, held at the Chicago Marriott Suites Deerfield, in Deerfield Illinois. The mixer was sponsored by ACTO, Informa Training Partners and Proficient Learning, and is the latest in the ongoing series of LTEN member events held around the United States.

Chuck Pearson of Astellas and Ashley Bentley of Baxter Healthcare were hosts for the mixer, welcoming attendees to the program and providing an overview of LTEN.

Pearson also served as guest speaker for the Deerfield mixer, leading an interactive presentation on the future of learning and “flipping classrooms.” In addition to his presentation, Chuck and members of his training team at Astellas – Amity Cutaia, Chris Abboushi and Sara Pipia – also broke the mixer audience into groups for facilitated discussions on various aspects of the topics.

Thanks to everyone who attended the event, to Ashley, Chuck, Amity, Chris and Sara for their presentations, and especially to the audience members who participated and contributed to make the event successful. Thanks also to ACTO, Informa and Proficient for sponsoring the latest LTEN Network After Work mixer.

Check out some of the photos here on this page to get a sense of the April 18 Networking After Work mixer. For more information on upcoming mixer dates, visit the LTEN event calendar.